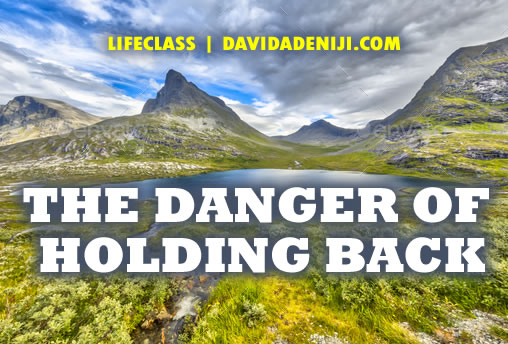 Hello my honourable LIFECLASS Students. I’m always glad to know you’re waiting for the class. It’s an honour to do this every day. Remember to visit our website www.davidadeniji.com to drop your comments, ask your questions or share your views or testimonies

Yesterday, I told you to lavish the little you have to get the much you don’t deserve. We also mentioned specifically by that you should focus on lavishing yourself into worship,  kingdom giving, and service. We also learnt that when you give to people, give them what will solve their problems to a large extent and not peanuts that will keep them tied to your sleeves. Look for yesterday’s LIFECLASS and listen to it, if you missed it.

Today, it’s more interesting. As I picked the story is Zacchaeus again in Luke 19:1-10. As I’ll always do, I tried to study it over and over again and apply for myself, the points I’ve been dealing on for 2 weeks my, the Lord open my eyes to the parable Jesus gave just after the Zacchaeus.

Yesterday, we learnt that it is dangerous to hold back the little you have just because you think it’s not enough and want to focus on growing it. When we said that yesterday, little did I realize that our Lord Jesus gave the next parable to authenticate Zacchaeus’ action. Remember that Zaccheaus had summarily given 50% of his worth to the poor and 400% of whatever he obtained falsely to any one he had wronged

Let’s title today’s LIFECLASS – The Danger Of Not Having

Just 3 verses after Zacchaeus was rewarded with salvation for himself and his household, the Lord Jesus shows us the real danger of holding back. ‘The disadvantage of not having’. He told the story is a noble man who gave talents to his servants and told them to occupy till he comes. In other words, he told them to do business and trade with those talents till he comes back..

When he came back, most of his other servants submitted their reports of how they had traded with the money given to them and made encouraging profits and their master rewarded them with authority, commensurate with the amount of profits they’ve made by investing the little they were given

But there was this particular guy among them who came to the master with exactly the same amount he was given. He didn’t invest it at all, he held back. As a matter of fact, he hid the money in a handkerchief and did nothing with it, for fear of losing it. He held it back. Listen to his lame excuse in Luke 19:20-21:

Master, Here is your money, I kept it safe for you in a handkerchief. I was afraid because you’re a hard man to deal with. You collect what you did not deposit and reap what you did not sow.

The master was very swift at discarding his lame excuse as sheer laziness and fear. I’m afraid many of us have this same excuse, we focus too much on the negative probabilities and economic forecasts that we forget the supernatural nature of He who owns us. We’re good at designing excuses for not investing the little God has given to us to possess.

When God taught me these lessons, I decided to always have time for my wife and children. If my children call me in the night, I will answer. However deeply buried I am into my coding scripts, I still say yes my people. I’ve done this for years and now, they have this strong confidence that anytime they call Daddy, he’s always there. I have chosen not to hold back my time from them

We’re not saying you can be available for everyone, but please don’t hold back yourself unnecessarily. Don’t hide yourself in a handkerchief like that servant for fear of losing anything.

Now, here’s the real danger of holding back. In verse 24 of that Luke 19, we see the real danger of holding back. That guy who made nothing from the money given to him had to lose that little to the one who made profit. The little he had was collected from him and given to the man that had made encouraging profits with his. People who hold back, eventually lose what they have to those who take the risks and let go. People who always claim they don’t have to do anytjing noble, will soon be humbled and have their time converted to serving those who invested theirs.

The reason many have suddenly become lonely as they grew older is that they didn’t have time for people when they were younger. They were too busy with their 8 – 5 employment and all their friends have built relationship circles without them. Now, alas, they’re about to retire and everyone who hangs around them are people who want to suck from them. The had held back their Lives from the people that mattered most

So let me ask you once again. Do you have time? Say yes, I have time. Only dead people don’t have time. Use your time in the most precious way. If you’re this talented and everyone wants to have a feel of you, then create channels through which you can engage them. Don’t enclose yourself in an unapproachable capsule and see people only from afar

Let me ask you, is there any gift in you that is lying dormant? Or you’re still waiting until you finish one school or until you can attend or graduate from one college before you start showcasing it, believe me, that’s the definition of holding back. Refusing to use what God has given you and having a beautiful excuse for that.

I encourage you to change this ‘I don’t have’ mentality. Think big and see far, don’t act like this servant who chose to focus on the negative possibilities of investing the money he was given for fear of not profiting. He ended up losing that little to the man who invested his. Invest your money wisely.

According to Jesus here, the condition for having more is to have some and use it wisely. Nothing more will be given to anyone who claims he has nothing and gives nothing.

Let me tell you a story. When I was an undergraduate, I found myself spending almost a third of my day, helping younger students pass tough mathematics courses for free. Even though I wasn’t studying mathematics, I had trained myself to become a specialist in theses difficult mathematics courses that made students fail. In a short time, I became a reference point on campus for mathematics. Even lecturers knew about my activities. It was herculean, but I had caught this principle of never hold back. Most of the students had nothing to give me and I had to be careful also not to let it affect my academics, but I couldn’t hold back because I just felt I was called for that.

Fast forward, more than a decade after that first degree, I found myself solving, not mathematics now, but real life problems in people’s businesses, teaching them principles that will multiply their sales in a very short time. Teaching them strategies to transform their businesses and all that. We even have testimony sessions in our business trainings and that gladdens my heart. It amazed me how a computer progtammer had become a business strategist with a business network of hundreds of business owners.

God told me I’m still doing the same thing. Whether it was mathematics in school, or programming on my laptop or transforming real businesses now in the marketplace, I was raised to solve problems, and that became possible because I didn’t hold back the little I had then

Decide today to stop hoarding yourself and your skills. Let everyone know you for something at least. God has given you everything you need to become what he has planned for you. But it’s a pity you’re holding back. You’re hiding his talents in a handkerchief. You’re not seeing far. You’re caught with the now, always trying to make ends meet. Forgetting that the earnest expectation of the creature awaits the manifestation of the sons of God. Your time is now to manifest, if only you will stop holding back yourself and the little he has blessed you with from. If only you’d give your all to him, and to his service.

Say Lord Jesus, I refuse to hoard the talent you have given me. I refuse to give excises. I release the little I have . my time, my intellect, my money. I manifest from today. I know you’re counting on me. I will not fail you.

I’m not saying you can have time for everyone, but hey pause, be careful to be available to the right sets of people, else