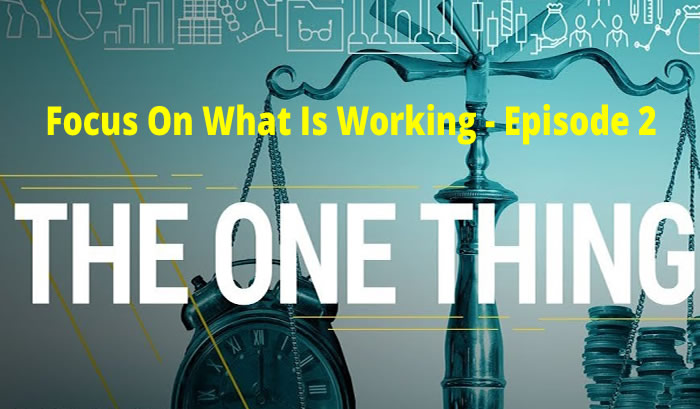 
WordPress Audio Player
Good morning everybody. Welcome to life class once again. My name is David Adeniji and I’m glad you joined me yesterday on life class. We started life class just yesterday and this is Episode 2. In yesterday’s episode, I opened the big theme for the month – i.e, In the next couple of day – Focus On What IS Working

And I said – I was giving an example – just like we do to children in school – match the objects. So you draw a line from the things are working and map them to any of the things that are not working and say  – with these I can revive these.

If you put too much attention on things that are not working, they become magnified before you, they look bigger than you. They may even look bigger than your God. Sometimes you begin to think subtly, and the devil may put deceitful thoughts on your head that your God cannot do them. Why? Because you have spent all your time staring on, focusing on, analysing and re-analyzing those things that are not working.

I continue in today’s lifeclass. Still on that story of Bartimeaus. But here, I’m showing you another angle to it. Remember the scripture is still mark chapter 10, this time, I’d like you to read it again from verse 45 to 52

Now, In a person’s life most times there’s only one major thing that is not working. Now that major thing may have now given birth to several other smaller things. For instance, in Bartimeaus’ example, the major thing not working in his life was his sight. Now you may have so many things not working, but you can always trace them to one thing that isn’t working. For instance, a person who wants a job, will not have money to do some things here and there. So because he doesn’t have a job, his children fall sick and he doesn’t have money to take them to the hospital.

Because he doesn’t have a job, he will not be able to dress fine, people look at him like one who has no value. So as a result, many of things are not working.

Other people who see him may not know what is wrong. He alone knows that the major thing or what not working in his life is that issue of unemployment. In Bartimaeus  life for instance, only his eyes were missing, so he had to go begging. One who sees him from afar and doesn’t know the reason why he’s begging will not know that he’s begging not because begging is his hobby, but because his sight is a problem. When you have one major thing not working, it gives birth to many other things. You need to identify that one major thing. Many times we identify the wrong thing, we don’t even know the exact thing that is not working.

The major thing not working in Bartimeaus’ life was his sight, he was blind, but also, one major thing working was his voice. His eyes were missing, but his voice was intact. I can’t see, but I can talk, I can shout, I can cry Abba-Father, I can pray, I can preach the gospel. Bartimeaus will not allow himself be defined or held down by what he does not have.

So, just because a person is blind doesn’t make him less of a human being for instance. Just because a person is jobless doesn’t remove his dignity. That you’re having issues with your relationships shouldn’t deprive you of the right to peace. Remember, in the Bible, Jesus says, my peace do I give unto you, not as the world gives and takes back.

Don’t even care when people pity you. Now that’s another big topic!

Many people like to pity you rather than help you. They believe by pitying you they are doing you a favour. Meanwhile, they are doing themselves a favour. They’re whiling away time, giving themselves an excuse not to do anything to help your situation. As a matter of fact, avoid those people who pity you. Listen to me. You should move away from them. Shortly, I will show you that example, again, in Bartimeaus. You need to move away from people who pity you.

You should associate rather with those who deal with you ignoring your weaknesses as though you never had them, as though you have all they have.

Personally, I like to relate with people who, instead of pitying me, deal with me looking at my strengths, ignoring those weaknesses as though, I never had them. Those are the people you need to eventually overcome theose weakness. Because they make you see the complete you, and not the incomplete one.

When they told Bartimeaus to keep quiet, he cried even more. I’m just interpreting his cry, because he cried out. Maybe these are the words he was crying:

“What do you mean? Why should I keep quiet?” Because you know, they told him to keep quiet.

“Just because I’m blind? I don’t need you in my life. Because you make me feel I’m not worthy to be healed. No I’m not obeying you. In fact, I’m relocating away from where you are. I’m looking on to Jesus the author and finisher of my faith. Of course I can’t see him now, maybe physically, but I can hear him. I may not have sight for now, but I have my voice intact. I can hear him too. He’s the one passing by, I know when He came in, I thought he’d stay for long, but as I heard him moving out of Jericho, I’m seizing this opportunity, I know he will heal me. So don’t stop me. This blindness does not define me.”

That’s what I’m telling you. That major thing that is not working does not define you. Cry out today Believe me, that Bartimeaus cry should be your cry

So, Big Question: What is That One Major Thing That is Working?

What is the one major business of your business that is pulling in most of your inflow (money)?

What is the one major ministry that is touching lives more?

Please, don’t underestimate the positives. It’s very important. God has armed you with them. Bible says the Lord has given us everything pertaining to life and godliness. Yes, what he’s trying to say is that everything you need to transform the negative things are already present in the positives.

I’d like you to say this prayer with me if if you want to receive him:

Father I thank you. I know that there are several things not working and one thing that has made some things not work in my life is sin. I’m ready to receive righteousness, which is an alternative to sin. I receive righteousness in Christ Jesus, by faith. Lord I thank you for giving me this opportunity. I choose to follow you. Lord forgive me of all my sins. Write my name in the book of life. Let all things begin to work for my good. Lord Jesus, become that one major thing that is working in my life. I’m glad you saved me. I’m free. Amen.

If you said that prayer, please drop me a comment.

And if you have any questions, or comments at all, you can drop a coment on my blog, or my social media handles on the contact page.

Thank you very much for attending Lifeclass. Let’s meet again tomorrow by the grace of God. We bless Jesus.