Focus On What Is Working – Episode – 9 – Lavish, Don’t Hold Back

Focus On What Is Working – Episode – 9 – Lavish, Don’t Hold Back 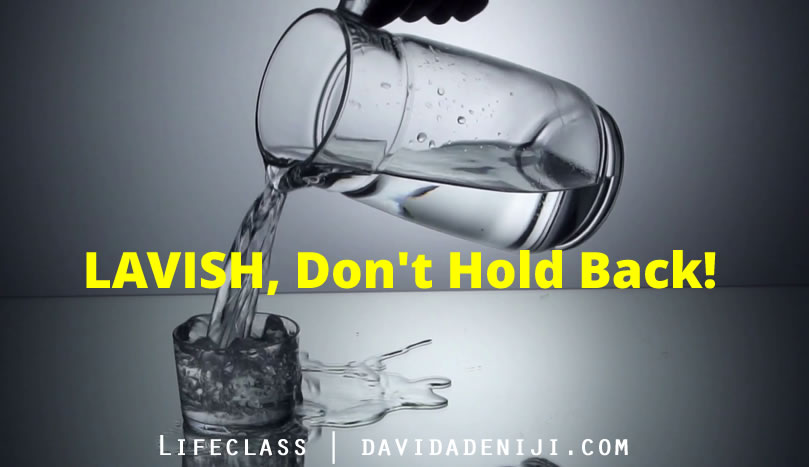 Focus On What Is Working - Episode - 9 - Lavish, Don't Hold Back

I welcome you once again into lifeclass. This is Episode 9 of our on-going series – Focus On What is Working. Please visit davidadeniji.com to catch all episodes.

I move very quickly into today’s topic – Lavish, Don’t Hold Back. And what I’m simply asking you is to Lavish the little you have. Don’t hold back. Please move on with me. I’m yet to recover from yesterday’s lesson – Friendship is powerful. Lifeclass has been a blessing to me since it started, I’m sure you’re saying the same.

So today, there’s an instruction. That instruction is for you to lavish the little you have instead of holding back. Now, please don’t argue with me yet. Here’s the reason why I used the word lavish. I needed something stronger than give. To lavish is to give something expensive, elaborately and not grudgingly. That’s the sort of giving God did when He gave Jesus.

You know, when you’re trying to fix some things not working in your life, there’s this temptation to hold on dearly and tight to what you have – the ones that are working. One who is always broke will naturally want to be so prudent that people hardly get anything from him. Blind Bartimeaus for instance would have been justified if he chose not to move an inch away from where he was even when Jesus called for him. He could just simply maintain his usual space and remain in his known zone.

One who has only few friends will naturally tend to cling on to the ones he has for fear or losing them and have none. Tithe is a big deal for instance, to many because they’re not sure of where the next money will come from. But it’s an error. What is not enough will still not be enough, no matter how much you manage it. Stop managing, start living.

IT’S DANGEROUS TO HOLD BACK

Avoid holding back because you are left with few. Lavish the little you have left instead. It’s hard to digest, but it’s a kingdom principle. That is the only guarantee for abundance afterwards. So when I tell you to focus on what is working, I’m not saying you should stay on one spot and refuse you spread out your wings and fly, even if you fear falling. I’m not saying you should stop dreaming or stop daring to venture into bigger territories in your business, relationships, career or ministry. Instead, I’m saying the opposite, I’m saying give more of what remains of that which is working, I’m saying lavish the known to get the unknown. When you simply give, you get back, but when you lavishly give, you get what you don’t deserve.

We know that savings is a sound practice for intellectuals, to everyone actually. But in God’s kingdom, that savings is not bank savings. When you save, you withdraw pretty much exactly what you have saved. When you invest, you get multiples of what you have invested. The wisest form of investment is that which you lavish into God’s kingdom. I’m not saying give. I’m saying give lavishly.

I will still take you back into the story of Zacchaeus in Luke chapter 19 verse 8. The moment Jesus declared He’s visiting his house, one would have thought the story has ended. People murmured about why the holy saviour would visit a sinner, by their standard.

Zaccheaus understood the principle of lavishing what you have to get what you don’t deserve. Or let’s just say his encounter with Jesus has imparted the Holy Spirit on him. Because it appears flesh and blood couldn’t have given him these wisdom.

And Zaccheaus stood, and said unto the Lord; Behold, Lord, the half of my goods I give to the poor; and if I have taken any thing from any man by false accusation, I restore him fourfold

Zacchaeus offered to give 50% of his worth to the poor, in his lifetime, not after he’s dead. And that wasn’t ok for him. He’s also giving 400% to anyone whom he has falsely obtained from. Now, that is not just giving. That is Lavishing, coming from someone who is at the lowest point of his life, who few moments ago, had to climb a tree like a monkey to see the passing saviour, honestly, that blows my mind. One would have thought, what else, he has seen Jesus, he’s fulfilled now, what else, but No! Zacchaeus understood that to enter to another realm of genuine abundance, he only had to do one thing – Lavish the little he has.

To give is good, but you may need to do more than these ordinary giving, start lavishing. Lavish your love on your employees. Let them feel the favour of working with a boss richer than them. Stop managing, start disbursing. Stop giving to people as if they won’t survive if you don’t give them. Step out of the comfort zone give and let your river of gifts overflow its bank.

If you want to give people money, give them money that will solve their problems and not one that will keep them tied to your sleeves. If you want to help someone get a job, help them all the way; don’t send them to your employer friends with incomplete CVs. Tidy up their CVS before they go. Lavish your help. Don’t drop seeds on the floor for people to pick up like chicken. If you want to carry people, carry them like those four men carried their friends to the foot of Jesus and refused to drop him half way.

Many people claim to do you a favour, but incomplete favour; one for which you can neither say thank you, nor, no thanks.

Let me show you something very quickly in Mark chapter 14 verses 3 – 9. There’s this woman who lavished an alabaster box of precious ointment on Jesus head and feet. The people around there complained about the woman, wasting the oil, saying why not sell this expensive commodity  for some huge amount and give to the poor instead of wasting it. This woman was in deer need of salvation and apparently the most previous thing she had was the oil in the alabster box. She lavished it on Jesus in exchange for something she obviously didn’t deserve. People called her a sinner, but Jesus says she had earned herself a permanent place in history, everywhere the gospel is preached, she will be mentioned.

So here’s your action point today, lavish your love on someone. Buy them a surprise they don’t expect. It’s so you can get something you don’t deserve. Identify a need in someone’s life and figure out how you can be a complete answer to their prayer. Remember I’m not telling you to give, I’m telling you to give lavishly.

But the best way to practise this principle is to lavish your love on Jesus. Lavish yourself on him. Give to the course of God’s kingdom. Decide to stop giving to God’s work, but rather start giving lavishly. God’s kingdom is not poor, so atop giving as of you’re forced to. When you package offerings, package amounts you’d be glad receiving yourself. See, it won’t finish. Stop all this statistical analytic calculations when it’s time to pay tithes. It won’t pay you. Be comfortable giving way more than 10% than giving exact.

Say Lord Jesus, I Lavish heart for you In Worship

I’m ready to Lavish my Substance to you  In giving,  I Lavish my Labour for you in Service

If you do these, things will not only work, they will work efforlessly

Have you received Jesus at all, say Lord Jesus, I want to lavish myself in your worship, I want you to accept me as I am. I’m ready to become who you want me to be. I receive your love in salvation. Thank you for dying foe me. Thank you for saving me.

I’m glad you came to Lifeclass today. Visit our website www.davidadeniji.com to share your testimonies and ask you questions.