Gush Of Abundance – Episode 13 – Give Your Way To Abundance

Home / Gush Of Abundance – Episode 13 – Give Your Way To Abundance

Gush Of Abundance – Episode 13 – Give Your Way To Abundance 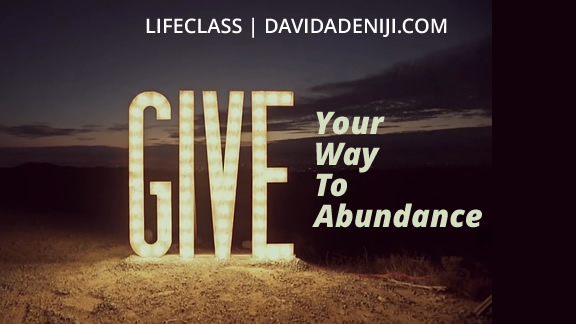 Gush Of Abundance - Episode 13 - Give Your Way To Abundance

Many thanks to you for joining another episode of LIFECLASS. Lord Jesus, we thank you for the opportunity to share life every day. Remember that you can catch up with all previous episodes on our website: davidadeniji.com.

Let me start by telling you or maybe reminding you of what I had said before, that abundance is God’s will for you. You’re to abound in every good work. To abound is to have or do exploits in abundance. The Bible says in 2 Corinthians chapter 9 verse 8 that

God is able to make all grace abound towards you; that you, always having all sufficiency in all things, may abound to every good work.

Check again, that part where He says “That you, always having all sufficiency in all things”. Not some, but all things. Or wait a minute. I think we have to read that scripture again from verse 6 and get the full message there. Check that 2 Corinthians chapter 9 from verse 6 very closely now in the New King James version.

7. So let each one give as he purposes in his heart, not grudgingly or of necessity; for God loves a cheerful giver.

8. And God is able to make all grace abound towards you, that you, always having all sufficiency in all things, may have an abundance for every good work.

If you just single out verse 8 of the scripture I just quoted, that is 2 Corinthians chapter 9 verses 6 to 8, where it shows that God wants you to have abundance in every good work, I mean if you focus on that verse 8 alone, you may be missing out a very important requisite for abundance.

Earlier in verse 6, it says, anyone who sows sparingly will reap sparingly and he who sows in abundance will reap in abundance. In other words, and according to the Living Bible translation,  if you give little, you will get little. A farmer who plants just a few seeds will get only a small crop, but if he plants much, he will reap much.

Today, I want to show you how to give your way to abundance. Abundance is very far from one who withholds all that he has with the hope of saving up for abundance. Please make no mistake; you can’t physically save up for abundance. When I talk about the gush of abundance, I’m not mincing words and your physical savings is not what will bring you the gush of abundance. So, be clear on the fact that the kind of blessing that will bring that abundance is not the one you work for or you save up for. It’s way higher than that. The abundance we’re talking about here is one that will rain on you from God as a result of his outpour on you by Grace. It’s not something that will come in drops and in bits; it’s something that will come suddenly and in a very short time. I told you earlier in this series to stop having a peanut mentality or a ‘manage it so it doesn’t finish’ ideology. That kind of mentality is not an abundance mentality.

So then if you scale up your thinking from peanut to mega, you need to change your ideology from ‘Manage it’ to ‘Give generously’ something like ‘Lavish it’. Not wasting but giving lavishly and expressing God’s nature of being unlimited, a nature that’s also in you. You are unlimited too.

You see, LIFECLASS, if you constantly meditate on and imagine the size of your God, you will change your offering, and you will reconsider your attitude towards giving to people.  I hope you have settled it in your heart that you will have to give your way to abundance. It’s just like when it was reported some few years ago, that our country Nigeria was in recession and money in circulation went down below normal. A situation where the economy really declined, thousands of jobs were lost and hunger appeared visibly on the faces you see. Analysts and economists came out, then to say that the easiest way out of that recession was for the government to spent its way out of it. The government had to deliberately pump money into the economy, through spending on projects, just to put money in the hands of the people.

Now, so it is with kingdom giving. Your easiest route to breaking an unusual gush of abundance upon your self is to give your way to abundance. And I don’t mean spending all and then giving what you have extra. No! I mean giving a sacrificial bulk of what you have and living on the extra by faith. Please don’t be flabbergasted. You heard me right. If you want abundance, you need to give and give bountifully. Now, I’m not telling you what I didn’t do. I have testimonies that still shock me till today.

Now, in today’s LIFECLASS, I will not attempt to explain the whole of giving as a kingdom principle and as a requisite for breaking your gush of abundance. But I will try to answer the question of who do you give to, or where do you give? This question is perhaps the most controversial when we talk about kingdom giving. I was troubled about it also some years back, but God helped me. How do you know if the soil you’re sowing into is the right soil that will produce your harvest? How are you sure that sowing into one ministry or the other is just the right thing to do?

I hope you understand that what you sow is as important as where you sow it. Ask the farmer and he will tell you that even the best seeds will not do well when sowed into bad soil. In the parable of the sower in Matthew chapter 13, specifically in verse 8, only the seeds that fell into the good ground produced harvests – some thirtyfold, some sixtyfold and some a hundredfold.

So, where should you give? Which soil is the good soil? The answer is simple. Here’s what God taught me. The best place to sow is where you have reaped. The best soil to sow into is one that produced a harvest the last season as a proof of its fertility. Before you determine that, you may have sowed wide like the sower in Matthew 13, but at the first harvest you see which soil produced a harvest, then you concentrate your seeds there. The very first gift we received from God is our salvation and we gave nothing to receive that. He now wants us to reciprocate that love in the form of sowing quality seeds into the kingdom and into the life of others to receive more abundance from Him.

If I attend a friend’s church on invitation and I got a revelation in God’s word that day that produced an unusual manifestation that week, then trust me, I will go back to that place and sow my seeds, even if I do not change my church. If I meet a man of God who shared a revelation that hit me in an unusual manner and that produced some unusual manifestation in my life, then that must be fertile ground, I will sow into that soil for more harvest.

If a minister in my church or a music minister ministers to me in a way that charges my spiritual atmosphere in an unusual manner, I will sow into that vessel. Now, notice I keep mentioning the spirit. I’m talking about the Holy Spirit. Let me show you something in John chapter 5 verse 4:

For an angel went down at a certain season into the pool, and troubled the water: whosoever then first after the troubling of the water stepped in was made whole of whatsoever disease he had.

When God’s love is stirred up in your heart (of course, by God Himself), whatever action you take spontaneously in response mean you’re hitting a nail on the head – a miracle is conceived. That response is the actual definition of faith. That response is always anointed. Be it giving or sowing or writing or labour or praying in the spirit or any act of faith.

So, avoid being unnecessarily sentimental or overly emotional with your seeds. Let no one coerce you or deceive you. Plant yourself in spiritual environments where the Holy Spirit and faith are engaged actively for instant manifestation. Then channel your giving into what stirs your spirit and do so spontaneously – I mean, when it’s still hot!. Even the Bible says quench not the spirit in 1 Thessalonian 5:19.

Kingdom giving is spiritual and the Holy Spirit has to guide you to sow in the right soil. So many seeds are lying in waste because they were not correctly channeled. Say, thank You, Lord Jesus, from today, you will lead me to channel my seeds to the right soil. And as I do, my abundance will gush in Jesus’ Name. Amen!

John 3:16 says God loved us so much that He gave his best gift – Jesus Christ. Only those who believe in Him will have access to every other gift He has, such as healing, prosperity or abundance. If you haven’t received Him or you need to rededicate yourself to Him, please say this prayer. Say, Lord Jesus, I thank you for the gift of your only begotten son whom you sent to die for me. I’m sorry for my sins and I receive your forgiveness. I accept you as my Lord and Saviour. Thank you for saving me in Jesus’ Name. Amen!

Again, we’ve come to the end of another LIFECLASS. Don’t miss any episode. It takes only ten minutes of your day. Remain blessed in Jesus’ Name, as you join me next time. Thanks.