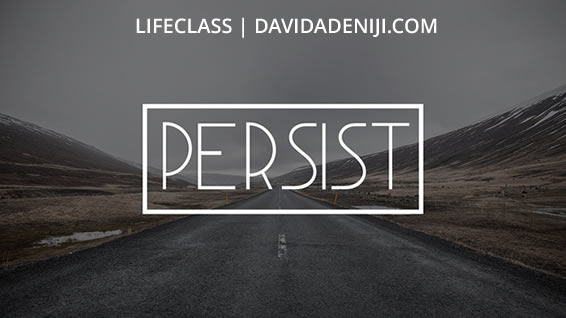 Hello and welcome to another episode of LIFECLASS, we’ve gone quite a long way. You may catch up with all previous episodes on our website: davidadeniji.com. Our series is still – Gush Of Abundance.

There is no success story without an episode of failure. The biggest hindrance to your gush of abundance will show up just when you’re already about to break that gush. We must understand, as I stated earlier on in this series that God and you are not the only interested parties in your abundance, especially if it’s to come in a gush. The devil is also interested in that miracle that’s about to happen to you. His own interest is to slow it down so it doesn’t happen quickly or stop it from happening at all. You make matters worse if you don’t understand his tactics. No devil can stop you LIFECLASS, but if you quit pressing on, you’ve allowed your abundance to be slowed down or stopped out-rightly.

Today’s LIFECLASS is titled: Persist. You could say – Go! Then Go again, keep going until you see that abundance that’s already here. Or You could say – Look, look again, keep looking until you see, just like Elijah commanded his servant in 1 Kings 18:44, check for your name in that merit list, wipe your eyes and then check again. If it’s still not there, then apply again.

Go for that auditioning or that interview and even if you fail, go again when another opportunity calls. Receive your miracle in that crusade. If the crusade gets over and you’re still not healed, go again with a stronger faith to the next one.

Listen to one LIFECLASS, and then listen to another one, keep listening until you birth your own revelation of abundance. And even when you birth it, continue listening to God’s Word because your life depends on it.  If you’ve prayed for something and you’re not getting it, pray again. PUSH – Keep Praying Until Something Happens. Usually, the evil spirit that tells you to quit always programs itself to show up just when your abundance is around the corner.

In 1 Kings Chapter 18 verse 43, yes, 1 Kings 18:43, that same 1 Kings 18 that we’ve been dissecting for the past 2 weeks or so. Check closely and see that Elijah had birthed that abundance of rain in his spirit; all that was required now was for his servant to see it also and confirm it. “Go up now, and look towards the sea” was the instruction he gave to the young man, hoping for him to come back with a positive report.

But obviously, this servant was not on Elijah’s frequency of faith. So, he had to be trained. At this moment, I’d like you to pause for a minute and scale up your faith to the level I’ve been driving at in the last few LIFECLASSES. Remember again that the abundance that will gush on you will be sudden and huge in Jesus’ name because that was how it happened to Joseph. Last night, he was a slave, and then this morning, he became the prime minister. That’s the message I’m sharing with you in this series.

Today, I want you to be aware of a costly mistake we make by losing focus and quitting just when our abundance is around the corner. Elijah’s servant went as commanded, but came back with a negative report. Of course, he reported what he saw. ‘There’s nothing my master’, he said. No appearance of rain. He could have as well thought in his heart: Stop punishing yourself with this agonizing prayer with your head between your laps. There’s no rain in sight. But Elijah was a man who wouldn’t quit. He ordered him to go again and as a matter of fact, kept going to check until there was a sign of rain. Go seven times if you like; just make sure you see what I’m seeing! LIFECLASS, I want you to see what I’m seeing. Your abundance is here already, in Jesus’ Name. Amen!

When you tarry in prayer, faith is released. When you persist in whatever you are pushing, faith is released as a force that will bring it to reality. Our Lord Jesus interestingly showed us an example of this When he healed a blind man in Mark chapter 8 verses 22 to 25. The Lord Jesus spat on this man’s eyes and laid his hands in him, then asked him if he could see. The man answered, ‘Oh, I can only see men walking like trees”. Apparently, he wasn’t perfectly healed yet. Verse 25 says Jesus laid his hands upon the man’s eyes AGAIN. Then were the man’s eyes restored. He saw everyone clearly.

This example is so perfect, everyone has to learn it. If Jesus did not persist, that man would remain partially blind and not completely restored.

Persistence is a secret to achieving abundance and in fact anything in life. When you start doing something, no one will notice you. No one will pay attention to you. No one will listen to you, and that’s because other people have started out like you and soon got tired of what they were doing and faded out. So, the world thinks your own case will be the same. You need to prove them wrong. If you fail and yet did not quit, you become better.

But then we need to balance this instruction. Not every venture should be persisted at. Elijah’s instruction was not just to look; the direction to look was stated too. “Look towards the sea”. This perspective is also worthy of note. When you persist, make sure it’s in the right direction. Make sure you’re not looking at the mountain when you’re supposed to be looking towards the sea. You need to look and look well in one particular direction. You will only receive as far as your eyes can see.

Say, thank you, Lord Jesus, I’m glad my abundance is here finally, and so I refuse to quit believing for it. Nothing will change my course; nothing will deflate my zeal or change my direction. I receive my gush of abundance in Jesus’ Name. Amen!

Just like the Lord Jesus laid hands on that blind man in Mark chapter 8 verses 24 to 25 and then persisted by laying hands again to restore his sight completely, He’s calling you again today; he will not give up on you until you surrender your life to him. If you haven’t received Jesus into your heart or you don’t yet have an evident relationship with Him, then this is for you. Say, Lord Jesus, I will not refuse your call this time. I thank you for giving me another chance. I’m ready to forsake my sins and so I receive your forgiveness. I open my heart to receive you as my Lord and Saviour. Thank you for saving me, in Jesus’ Mighty Name. Amen!

Oh, what a wonderful class this is! Thanks for joining LIFECLASS today. Remain blessed as you meet me again in the next class in Jesus’ Name. Amen!