Gush Of Abundance – Episode 3 – Stay In One Place

Home / Gush Of Abundance – Episode 3 – Stay In One Place

Gush Of Abundance – Episode 3 – Stay In One Place 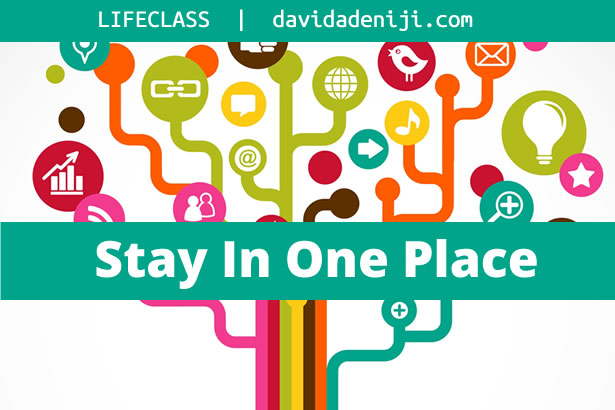 Gush Of Abundance - Episode 3 – Stay In One Place

Hello everyone. This is LIFECLASS and I welcome you to class. I’m really excited because today’s class is going to be awesome. Please visit our website: www.davidadeniji.com to catch all episodes of LIFECLASS and to get the newly released book titled: “Focus in what is working”.

Yesterday, we saw clearly that even though abundance happens suddenly, it takes a whole lifetime of continuous preparation. Abundance may come occasionally, but preparation goes down continually.

Very quickly let me take you again to yesterday’s scene where the Apostles got that gush of the abundance of the spirit in the book of Acts, chapter 2 verse 2  after they had prepared for it in Acts chapter 1 verse 4 and verses 13 & 14. Permit me to show you that preparation was not the only thing that brought the sudden gush of abundance that came on them like the rush of a mighty wind, in Acts chapter 2 verse 1, the Bible says the disciples were with one accord in one place. What that means is that each one of them had settled it in their minds that they had no place to be other than that place they were at that time. Their minds were not wondering around thinking of how to make it. The disciples were not thinking of resigning their position and hurrying out of God’s service. The disciples understood that for their gush of abundance to arrive suddenly, they had to stay in one place and be calm. The disciples knew that to succeed in anything in life, you just have to do one thing and do it consistently.

Abundance will not come if you have too many alternatives or when you dissipate your energy on several different pieces of activities that do not tie up together. Abundance will not come if you’re under one employer and yet you spend half of the time he has paid you for, searching for another greener pasture elsewhere, thereby not giving your hundred percent (100%) service and not learning all there is to learn.

The disciples were with one accord in one place. May I tell you today in this LIFECLASS that you need to stay in one place if you really want abundance. And don’t get me wrong,  no one would stay in one physical location forever, but maybe if you understand what the Bible says in Psalms 75 verse 6 and 7, that

7. But God is the judge: He puts down one and sets up another.

And that in 1 Samuel chapter 2 verse 9, says that By strength shall no man prevail,

Maybe if you understand that your abundance is not in how many jobs you change per year or how many titles you attach to your name or how many business ideas you juggle up per day in your mind, I mean maybe if you know that you need to rest your mind in one place, you will be settled enough to hear the rush that is coming your way.

The Bible says in Isaiah 46 verse 10,   be still and know that I am God. I can tell you for free that God is not in many of the plans you make in a hurry and they may continue to fail as long as you’re making them from a position of unrest in your mind about your tomorrow or uncertainty in your spirit about God’s plan for you.

Your Abundance is tied to your consistency at doing just one thing. If you choose to run from pillar to post, or from one business to another or from one location to another, then you’re delaying your abundance. Let me show you another graphic detail of this principle. Over here in 1 Kings chapter 18 verses 41 to 46 where Elisha and Ahab needed to have abundant rain in the land after three and a half years of drought earlier decreed by Elijah himself. Look closely in verse 43 when Elijah told his servant to go check if the rain has started, the servant came back saying there was not even a cloud yet. Elijah had to stay in serious prayer on the Mount Carmel. He refused to quit praying in a spot, he told his boy to go again and check for that rain. He instructed him to keep checking until the seventh time. Instead of quitting, he stayed there until a little cloud formed and consequently there was a gush of abundant rain.

If God wasn’t consistent, he would have stopped creation on the very first day when he created light and He saw the light and the light was good and he separated day from night, in Genesis chapter one verses 1 to 5. But God stayed on the job of creation, the second day, the third day, the fourth, the fifth, until the sixth day when he hit the biggest creation of all time – Man, the one who was created as a replica of God himself. Had God stopped on the first day and quit the job of creation when the creation was just ‘good’, he wouldn’t have realized that it could actually be ‘very good’ according to verse 31. Had God quit creation on the first day, man would not have existed and there would be no image of God, as we are today.

So, you have to stay in one place, on one thing, in one project, with one assignment, until you break the ice. Hit one spot and hit it hard enough until there’s a gush. Relax and be at rest. Your future is settled in God. Gaze your focus on the sky until the clouds form. Keep your focus on that cloud until there’s a gush of rain.  Just like the disciples, set your mind in one place and before you know it, there will be a sudden rush of God’s blessing on whatever it is you’re preparing for.

Say, Lord Jesus, show me that one place that I must stay. Let me not hurry out of destiny into sheer labour. Show me that one idea I must push until there’s a gush. I receive God’s rest from every human worry. I receive my Gush of abundance, in Jesus Name.

When Jesus returns, it will be like a gush. The Bible says He will appear suddenly in the sky. But only those who are born again will rapture with Him. Are you sure you’d be one of them? Come to Jesus today or return to Him if you’ve been drawn away. Say, Lord Jesus, I’m ready for your touch. Let me not lose this grace you’ve made available for me. I open my heart and receive you into my heart. I receive your forgiveness for all my sins. I’m glad I’m saved. In Jesus  Name. Amen!

Many thanks for attending today’s LIFECLASS. Please invite someone to the next class. See you then, by God’s grace in Jesus’ Name. Amen!